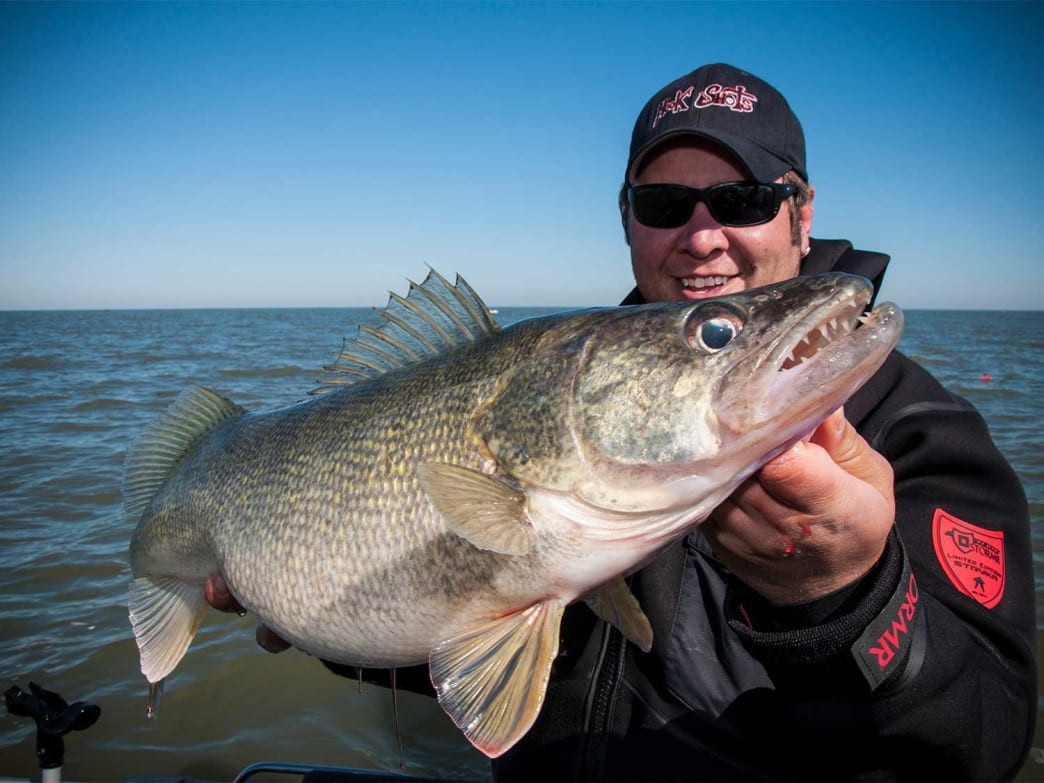 Fall is time for football, ducks, and bucks for a lot of outdoorsmen across the country. In many ways, the trophy fall walleye bite gets overlooked by all but the true walleye diehards. But during this cool-water period, you have the best chance of scoring on a fish that will make even your buddies sitting in a tree stand jealous. Unlike the spring bite, which might only last a week, on many bodies of water, a fall bite can last several months and be less affected by weather.

Some lakes setup better for fall bites than others, so if a 30-plus-inch walleye is your dream catch, here are 10 lakes that should be on your destination bucket list come autumn.

Largely regarded as the walleye capital of the U.S., Erie doesn’t need much of an introduction and the fall bite doesn’t disappoint. Walleyes that have migrated to the central and eastern basins work their way back to the western basin where most will winter and stage for the spring spawn. Ohio waters east and west of the Bass Islands near Port Clinton hold the biggest concentration of heavy-hitters come fall.

Top Tactic : Dipsy divers and spoons are an overlooked option to target deep walleyes in the early fall. As water temps dip into the 40s more traditional crankbait options on planer boards are best as walleyes begin to suspend more to chase large schools of baitfish

Tip : Fish away from other boats, as big walleyes are spooky and engine noise often pushes them out of confined areas. The lake traffic can be light during the week, but even though fewer anglers fish in fall, if the weather is nice on a weekend it can still be a zoo.

Devil’s is literally jam packed with walleyes, and they grow big. The beauty of this lake is that a variety of tactics will score during the fall, making it a top pick for anglers that sort of get married to a certain approach. My advice? Even if you love one kind of fishing, on the occasion the going gets rough, change it up until you drill down on exactly what the true beasts in Devil’s want.

Tip : As weeds die off and walleyes move to rocky areas, use side imaging to locate smaller isolated rock piles and vertical jig with lures like Jigging Raps.

Known to the locals as “Sak,” it’s the third largest man-made lake in United States, covering more than 300,000 acres. In the ’90s the secret got out about the excellent walleye fishing, which ultimately hurt the lake despite its remoteness. In recent years, Sak has rebounded to become a walleye factory once again, and giants are common.

Top Tactic : Smelt make up a large part of the walleyes' diet. Fish hold deep on steep breaks and can be located literally one by one with your electronics. When you find one, drop right on it's head with a jig or glide bait.

Tip : Don't be afraid to go big. Fish a large hair jig or jig and plastic tipped with a 3- or 4-inch live minnow.

Definitely a “sleeper” in the walleye scene, this roughly 20-mile-long impoundment of the North Platte River produces big fish. The abundance of alewives is what really helps them grown. Cottonwood trees also thrive in the shallows, providing excellent cover for baitfish and trophy walleyes alike.

Top Tactic : Use jigging spoons in the cottonwood trees. The bendable spoons made by Big Eye Spinnerbaits are fairly weedless, helping to reduce the amount of spoons you end up losing.

Tip : Don't be afraid of the snags, because the biggest walleyes hang in the trees. Baitcasting gear and 20-pound braid help get hooked fish up and out of the cover fast.

This extremely large bay off of Lake Ontario is really more like a deep river system. While other areas of the lake may produce more fish, Quinte is the home of legendary giants. Social media has helped spread the word and produced more boat traffic, but the lack of large boat launches and accommodations has kept this gem somewhat underfished.

Top Tactic : Considering size trumps numbers here, trolling to locate small pods of active fish is important. A variety of deep-diving crankbaits can get it done.

Tip : Use thin-diameter braided line to get crankbaits deep and into the zone without using additional hardware. Planer boards as far as 150 feet away from the boat work wonders if Quinte's hogs are being spooky.

While this river may need no introduction, it may with regard to walleyes, as these fish certainly aren’t what it’s most well known for. Pictures can be found all over the internet of gigantic Mississippi River walleyes that are caught in the spring, but these same giant walleyes see very little pressure in the fall and into early winter when there are still ice-free boat launches.

Top Tactic : Don't be afraid to go shallow—pitch light jigs against the sloping drops in holes and along quieter shorelines.

Tip : Less action is better. Let the current do the work for you when working a jig. Concentrate on current seams at bends, underwater points, and bottom transitions.

Walleye anglers in the know will tell you that Lake Michigan doesn’t have as many walleyes as Erie, but Michigan actually has some of the biggest in the country if you know where to look. These giant nomadic fish can be difficult to find and almost impossible to stay on top off most of the year. In the fall, however, the biggest of the big migrate back into large, shallow bays to winter. More isolated from large cities and boat traffic, Bay de Noc is one of several Lake Michigan bays that hold these tanks.

Top Tactic : Shallow stickbaits trolled at night are hands down the best way to consistently get bit. When walleyes get too deep to reach with these lures, add segmented or straight leadcore to get them to the desired depth.

Tip : Fall night trolling is traditionally done at painfully slow speeds. On Bay de Noc, don't be afraid to troll faster than normal in order to locate active schools, and then slow down if necessary to fine tune the presentation.

The stretch of the Columbia River from Bonneville Dam to Grant Coulee Dam is actually a series of reservoirs that create some of the best walleye habitat in the country. Abundant food sources such as American shad, smallmouths, catfish, salmon smolt, steelhead smolt, crawfish, and lampreys provide nutrition that grows walleyes to magnum proportions. The Columbia is often overlooked as a walleye destination due to it both being outside of the typical walleye region and because locals are so focused on trout and salmon.

Top Tactic : The combination of trolling crankbaits up stream to cover water and vertical jigging as you slip-drift down current after you have located walleyes allows you to maximize your efficiency.

9. Lake of the Woods/Rainy River, Minnesota

This vast boundary water has been a go-to destination for walleye hunters for generations, and according to local guides, the open-water bite is as good as it ever has been. Large schools that roam the wide basins in the summer months migrate back near the river mouths come fall. This migration makes it easier to locate and stay on fish. It also gives you a break from fishing open water, which can get very windy and rough on Lake of the Woods.

Top Tactic : Crankbaits delivered via downriggers has been the worst kept secret here. Use the downriggers to control depth and get your lures right off the bottom without snagging. Run one line as high as 10 feet off the bottom to coax giants chasing larger, nomadic baitfish.

Tip : To make this huge body of water less daunting, focus on hard bottom near neck downs or areas that have rock piles.

This large bay off of Lake Huron was known to produce giant walleyes year around 20 years ago. A large depletion of baitfish caused the salmon population to plummet and the walleyes seemed to almost disappear. In recent years, however, the walleye population has been very good, but getting trophies in the warmer water seasons has been difficult, as the largest fish roam the vast and deep open waters of Lake Huron. In the fall, though, the largest fish in the system migrate back to winter in Saginaw Bay and the Saginaw River where they will spawn come springtime.

Top Tactic : Because Saginaw is fairly shallow and gas kickers can spook fish, slow-troll crankbaits with your electric motor. The colder the water, the more the fish gravitate to suspending stickbaits.

Tip : Unlike many other waters on the Great Lakes, don't be afraid to run deep diving stickbaits close to bottom. A good portion of the fish will be suspended, but the biggest fish in the system can often be found on or near bottom.

Written by Ross Robertson for Field & Stream and legally licensed through the Matcha publisher network. Please direct all licensing questions to legal@getmatcha.com. 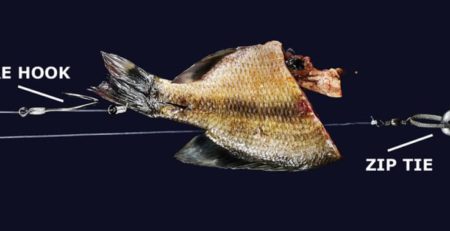 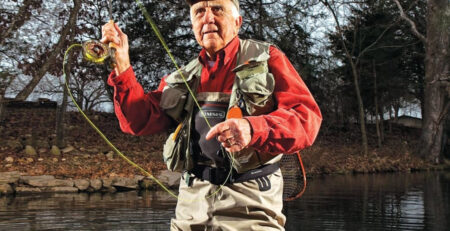 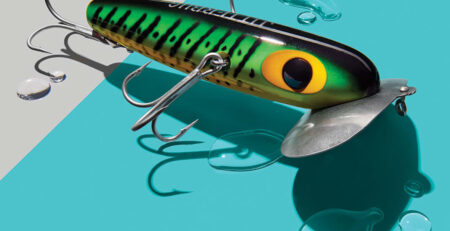 The tactics and tackle you need to land giant trout, cats, muskies, and bass after hours The best... read more 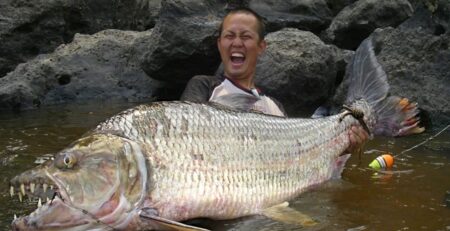 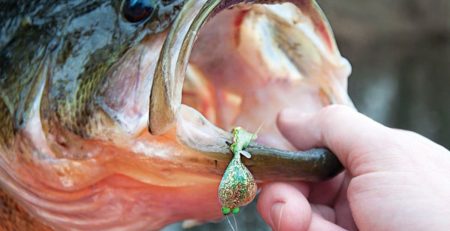 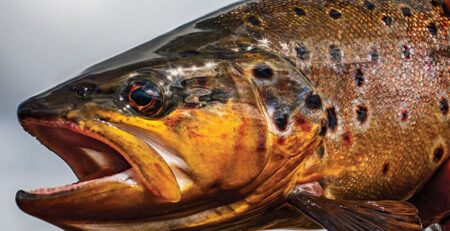 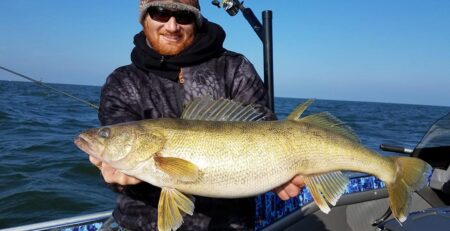